In my last article, The evolution of test documentation; lessons learned from implementing Cucumber, I explained two things. Firstly, how we at Infomentum have adopted Behaviour-Driven Development to define test scenarios, and secondly, how we use Cucumber JVM as an implementation platform for running these scenarios as automated tests.

Like many organisations running agile projects, we have Jira as our activity hub for managing and tracking them. So, we were keen to use Jira to define and store our Cucumber features and scenarios; we wanted all the aspects of a user story (defects, tasks, tests), and their current status, to be seen in a single view (particularly helpful when evaluating the definition of done).

In this article, I'll explain how we went about utilising the Jira REST API in our bespoke test automation framework, to enhance our automated test capability, and give more visibility to our automated tests. This screenshots below show you how. 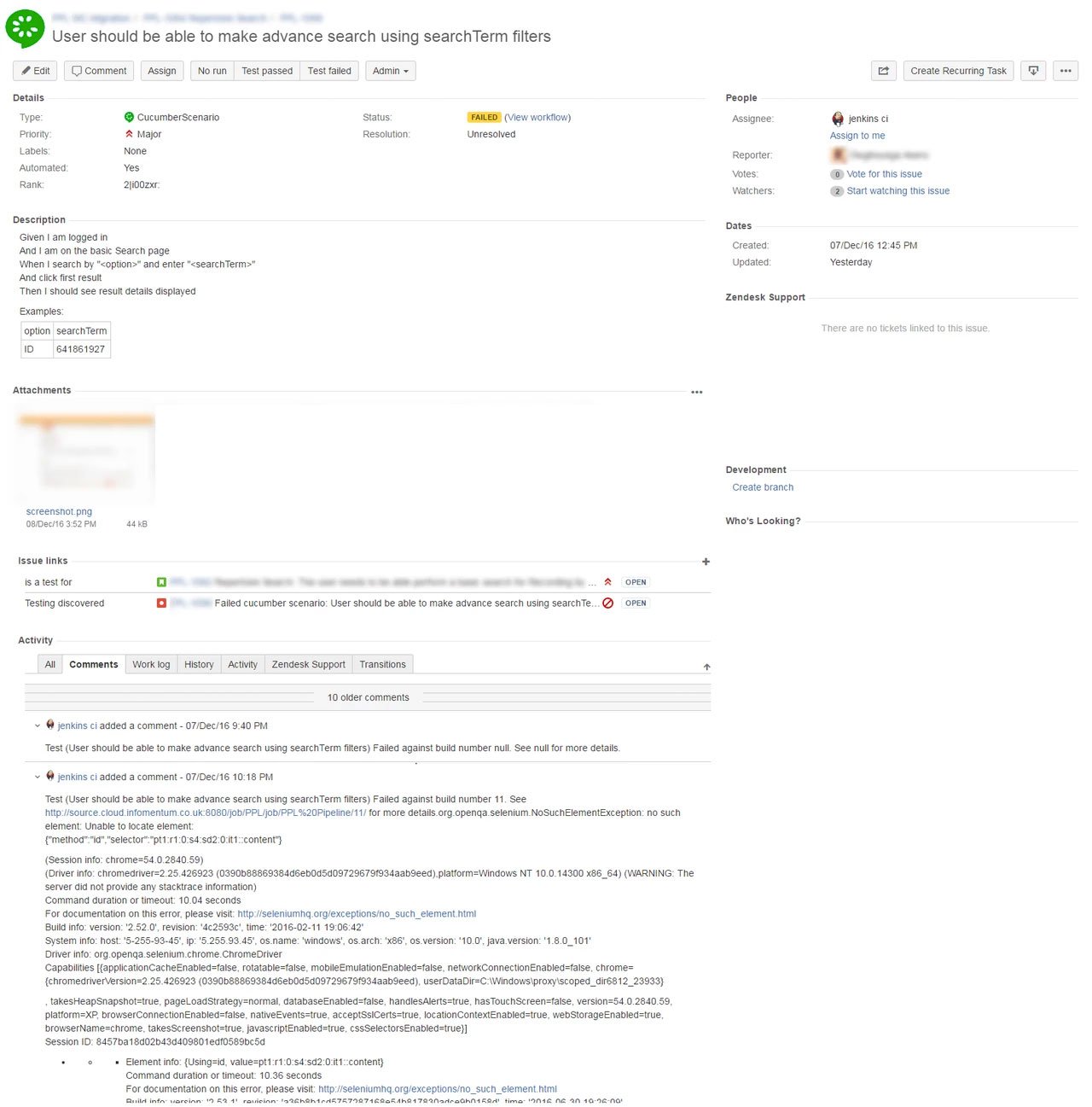 The following diagram summarises how we map issues of different issue types, and their relationships, using Jira issue links. This means we can view the full picture of a story, and all of its dependencies and impediments, when we're planning a sprint. It also lets us progressively evaluate the definition of "done" when we're executing a sprint.

You'll need a hand from someone who has access to Jira's admin screens, and knows their way around them. (I won't go through the details here). On your shopping list, you'll need to include the following:

If you manage to get that lot done, then you've survived the first test!

You can use this setup even if you only automate some of your Cucumber scenarios, or if you don't automate any at all. It's still a really useful way to update your test results when you're executing a test manually, during a manual test execution. 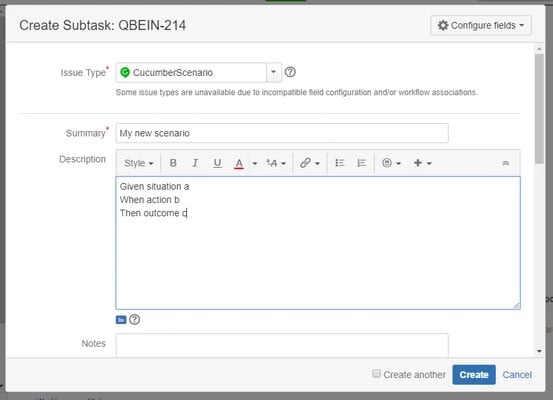 As a Cucumber user, you'll be all too familiar with what a .feature file looks like. Before our integration with Jira, we were writing these straight into in an IDE or a notepad. We then squirreled them away in a code repository, where they started collecting dust, and disappeared from the product owner's sight.

We now have our features and scenarios defined in Jira, and our product owner uses issues and sub-tasks. Another change is that the .feature files are written dynamically, on run time, which is has a number of plus points:

This diagram summarises how we map a Jira issue element to a cucumber .feature file.

As you might guess, you’ll create the dynamic feature files before a Cucumber JVM runner executes the tests. To make this easier, we’ve written a custom class BuildFeatures.class, that’s executed by Jenkins before the Cucumber TestRunner. It works like this; first, it fetches the scenarios from Jira, through a search function. Then, it writes the feature file, in the correct format, into the project or target directory.

This function takes in a parameter, which is the Jira project issue code. We use this code to execute a query within the Jira instance, which identifies all of the automated features within the target project. I’ll tell you more about this is in a bit. After this first step, we iterate each issue in the result set, to determine the automated child scenarios of each feature. This step lets us exact the key information that’s required to populate the .feature file.

For each given feature in Jira, we create a new file in the target directory, using the feature description as the filename. We then populate this file - first with details from the feature, including the headline, description, and any labels. The Jira labels are used as the Cucumber @annotations for defining test sets. We then populate the details of each scenario related to the feature, one at a time. This includes the headline, the descriptions (the Given, When, Then statements), and again, the labels used as @annotations.

A sample output is as follows:

Note that the issue key, status and priority are also written as labels for each scenario. This lets us select to run an individual scenario, or re-run all failed scenarios, or all high-priority scenarios with ease.

3. Working with the Jira API

We used the Jira Java Rest Client (JRJC) for working with the Jira REST API, which comes with lots of useful methods for interacting with issues. The downside to this is that it isn't well-supported anymore. When we built features, we authenticated with Oauth. We had a great deal of “fun” with it, but got there in the end. To give you some extra help with this, I’m sharing a useful guide. Once you get that working, you deserve a coffee!

Not all JRJC functions seem to work when authenticating with Oauth, so we're still using basic authentication for transitioning and creating issues (more on this coming up below).

The following code block shows how we instantiate an instance of the Jira helper, using the preferred authentication type.

Now that we have our Jira helper instance, we can start to use some of our custom methods. In BuildFeatures, you might have noticed a call to jira.getAllIssuesAndSubTasks(projectKey, issueType). This method uses our authenticated Jira session to execute the required query, by using Jira's JQL syntax. Then, it iterates the result set for each issue, to obtain the required information (first for the parent feature issue). Within that step, it finds all sub-tasks for each feature (the scenarios) and iterates those. Again, it grabs all the necessary attributes as it goes along.

We use the custom field above (“Automated”) to include only the features and scenarios which are automated. This is to select the ones to include in the feature, and which ones to ignore. Note that you have to reference it by field ID.

After executing each scenario, we update the status of the associated Jira issue, by using the workflow transitions I defined above. If it fails, we add a screenshot, and we can raise a defect if the failure isn’t a known existing issue. On top of that, we add the status, build number, and the reason for failure to a comment, so we can maintain the execution history.

We use the @After hook within the StepDefinitions file, to call a function that updates the test status of the Jira issue, after each test scenario is executed.

We’re currently using basic authentication to update Jira issues, and we’re using the JRJC library to support the issue operations. To begin with, the issue is located by using the JiraRef (captured above). If the scenario fails, we attach the screenshot that we previously captured. Then, we construct a comment with the status of the scenario, and the stack trace of the exception. This comment is added to the issue as part of the transition action. In the case of failure, when updating Jira, a defect can optionally be created. In this case, the newly created issue is linked to the scenario.

Each time we create a new Jira issue, we check if there’s already another issue with the same summary description. We do this so that the same failure isn’t raised as a new defect on each run. Assuming it doesn't already exist, we then populate the description of the new issue with details from the stack trace. Other mandatory attributes are also populated. After the issue is created, we attach the screenshot of the failure to the issue and the issue key is returned so that it can be used to link the defect to the test scenario.

Of course we want to run all of this from Jenkins, which is where our Jenkinsfile comes into play.

I didn't write this as a full how-to guide; it's more of an overview of how we utilise Jira. If you'd like help with anything else, please get in touch!

In my next article, I'll talk about how we use this framework to run automated security vulnerability scans. 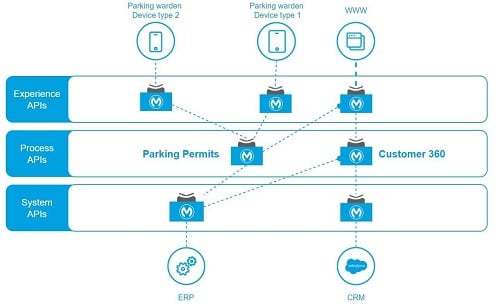